Coffee lovers are skipping coffee shops to brew their own store-bought coffee at home and at the workplace. Convenience-wise and budget-wise, it makes sense to buy and brew grocery store coffee. But, can it be done without giving up the satisfaction factor? Surveys and professional taste-testers say yes, but there’s only one way to be sure. Try it!

We have narrowed down a few that we think are worth considering. So, on your next trip to the supermarket or online retailer, consider choosing one of our top picks for the best grocery store coffee brands to brew at home and at work. 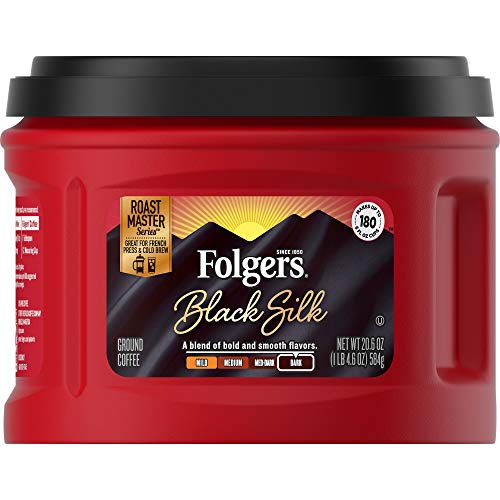 We think Folgers Black Silk is the best tasting grocery store coffee! It’s a very bold dark roast that’s stronger and intended to satisfy most coffee drinkers, including those with the coffee-house habit.

Did you know that coffee shops usually serve bold, dark roasts with intense (and memorable!) flavor?

The taste then sets the bar for quality in the consumers’ minds so there seems to be no real comparison when having coffee at home, the office, or the local diner. Unless, of course, the coffee lover finds a similar roast on the supermarket shelf!

Prefer a more subtle flavor? Suit your taste by making adjustments with cream and sweetener without losing any coffee flavor. After all, it’s what the baristas do!

The Folgers brand also offers House, Breakfast, Classic, or Decaf blends. If they aren’t quite what you’re looking for, how about the flavored varieties that include Cinnamon, French Vanilla and Chocolate Silk (yes, you read that right… chocolate silk!).

Approaching a trillion dollars in annual sales, excluding the Gourmet and Single-Serve blends, Folgers is determined to have something to satisfy most consumers.

Mrs. Olsen, the friendly neighbor in yesteryear’s Folgers’ television commercials, advised housewives who were struggling to make a decent cup of coffee to buy the ‘foolproof coffee’ – Folgers.

Today, Folgers is still viewed as the shortest and surest path to the best cup. 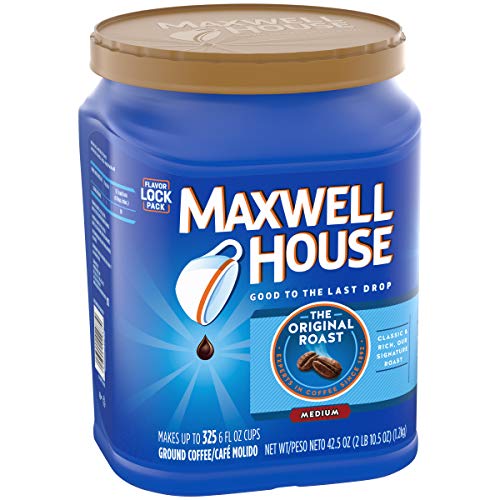 Does the quality live up to its popularity? Not really. It seems to be stuck in the ‘fair’ category for all of their blends, including the Maxwell House original roast.

However, Americans typically favor medium roasts and this one is clearly preferred by those who prefer to drink it black. It’s really the best way because the flavor gets totally washed out when it’s served with creamer and/or sugar.

On the plus side, unlike most brands, there’s no bitterness or acidity as the Maxwell House coffee sits and cools. From this perspective, it lives up to its slogan – ‘good to the last drop’ and it’s perfect for those who want to relax and linger over a cup.

Maxwell House had the distinction of being the best seller in the U.S. until the 1980’s. With nearly half a billion dollars in annual sales, this familiar brand is now in 2nd Place and rising. Its continued success has been taste-driven from the start, with the help of some very clever marketing.

In 1892, a Nashville hotel, the Maxwell House, was given 20 lbs. of a specialty blend of coffee at no cost. They served it to their guests until the supply was exhausted. Reverting back to their previous house blend, the hotel patrons squawked loud and clear for the specialty blend. Of course, it was brought back.

Savvy marketing has continually shored up consumer loyalty. In 1942, Maxwell House issued their newly formulated instant coffee to the US military. It created great publicity along with a substantial base of loyal followers for the eventual introduction of instant java into mainstream America.

In 1976, Maxwell House heavily advertised a blend called ADC – Automatic Drip Coffee – to go along with the revolutionary and highly-successful Mr. Coffee machine that had hit the stores a few years prior. The promotion couldn’t have been timed better and sales of both the coffee maker and the ADC coffee skyrocketed!

Moving right along with the clever marketing strategies, Maxwell House was the first brand to be certified Kosher and promoted to Jewish consumers for Passover. The ‘coffee bean’ was presented as a ‘coffee berry’ to gain acceptance. It’s now the primary brand that’s offered at Seders held at the White House and around the globe. 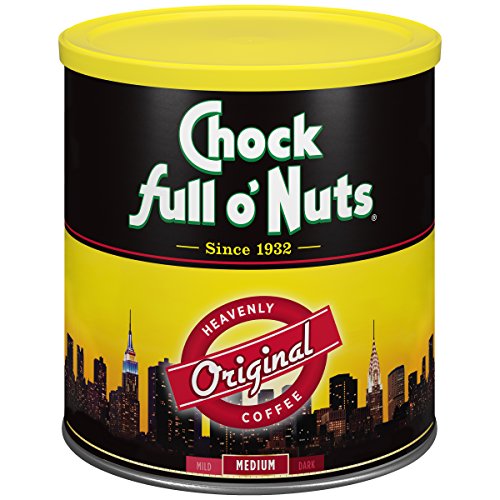 As for the taste, Chock Full o’Nuts isn’t anywhere near ‘heavenly’ but, like it’s famous sandwich, it falls on the nutty and sweet side. It’s subtle enough to be enjoyed black. ​

No nuts? What’s with the name? The brand’s shops in New York City started out by selling nuts ‘sans shell’ in Times Square and all around the Big Apple. As the Depression lingered, the nuts were no longer affordable for many and sales steadily declined. Then, a stroke of marketing genius! ​

The nut shops were converted into casual lunch counters where consumers could enjoy a cup of coffee and a sandwich for only 5 cents. The sandwiches were unique, made of cream cheese with crushed nuts between toasted slices of raisin bread.

They were put together with tongs and promoted as ‘untouched’ sandwiches. Healthy – Nourishing – Affordable! And, perfect for sharing with a friend.

Early lyrics of their famous jingle noted that Rockefeller’s money couldn’t buy better coffee. Nelson Rockefeller, the Governor of NY State and an investor in coffee, sued to end the use of his family name. He won, but so did Chock Full o’ Nuts. The publicity and the brand message were priceless!

The shops disappeared by the late 1970’s; the brand’s message remained in the hearts and minds of its loyal followers. In 2010, a Chock Full o’ Nuts opened its doors in NYC again, like a friend coming home after a long time away.

There are plans to dot the cityscape with at least 50 more in the near future. Yes, nut sandwiches are on the menu. And, affordable coffee served with a splash of nostalgia!

In-store, there is a wide selection available in medium and dark blends. There’s also a Half Caffeine blend, an Energy Blend with 20% more caffeine for an added kick and Organic coffee. 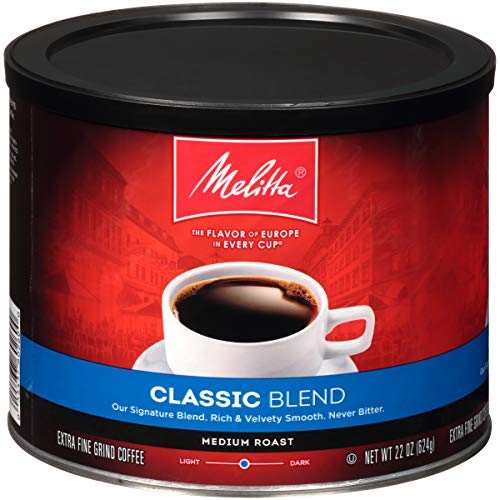 Promising the taste of ‘Europe in every cup’ may not be far-fetched for this German-based coffee group. They’ve been perfecting coffee blends and brewing techniques for over a century.

In fact, thanks goes to Melitta for introducing the coffee filter! They’ve since developed and introduced several types that are eco-friendly.

Melitta promoted its non-bleached plain brown coffee filters in 1989 to lessen the processing impact on soil and water.

After discovering that consumers really don’t like to use brown paper, they introduced white filters that were bleached with oxygen in lieu of chemicals. In 2007, the bamboo coffee filter entered the market. This brand is always striving to deliver something better!

It has a reputation for being on the pricey side. But is it really? Melitta coffee is a very fine grind that aims to release the most flavor during the brewing process. This makes it highly budget-friendly when considering that it takes less coffee to brew a cup.

As well as providing a rich, dark roast, Melitta makes the smooth, nutty, and fruity medium roast that’s best served black. It’s ideal as a pour-over coffee but it’s also suitable as an automatic drip. Along with a variety of coffees, they offer coffee-making machines and accessories. When it comes to coffee, they’re all in!​ 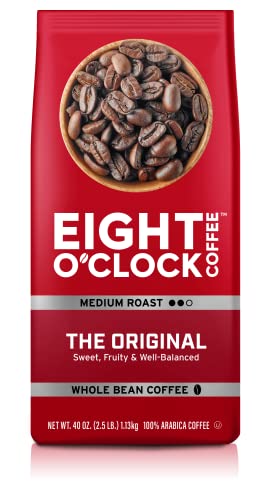 There was no branding when the A&P supermarket chain introduced these coffee beans in 1859. They were simply generic beans that were sold by the bag.

The brand was the result of a 1919 survey that inquired about the favorite time of the day for consumers to drink coffee. There were two overwhelmingly distinct times chosen – 8 o’clock in the morning and 8 o’clock at night. A brand was born!

Until 2003, the company continued to market only whole coffee beans. They then introduced a very subtle, medium grind selection that had a hint of chocolate and slight sweetness.

This roast actually leans towards being a darker roast, so it satisfies on both sides of the fence. Eight O’ Clock’s 100% Colombian Roast has been named the ‘best buy’ of all ground coffees.

Nothing beats the convenience of having coffee on-demand right where you are. There’s no need to run out to a commercial location, wait in line, place an order and pay an exorbitant price for the experience every time you have the urge for a cup of Joe.

As for the affordability of brewing coffee at home, one of the easiest ways to trim the fat off the household budget is to eliminate, in part or whole, the recurring expenses that are made of habit rather than necessity.

Try bypassing the coffee baristas for just one week and count your savings. Calculate doing this for a month. Surprised?

We’re constantly testing and trying new coffees, so be sure to come back to see what’s new and let us know in the comments with your favorite grocery store coffee brands and why.

13 thoughts on “Best Coffee To Buy At The Grocery Store”