Old World Pepperoni is an intensely flavored sausage. Its irregular slices and spices will remind you of a land before time. But does all that old world charm have a place in modern-day recipes? In this article, we’re going to explore the secrets of Old World Pepperoni. You’ll learn its origins, ingredients, and a few expert tips on how to prepare this pepperoni like a pro, and reviews of two of the most popular Old World Pepperoni brands.

What Is Old World Pepperoni?

Sometimes called sausage pepperoni, Old World Pepperoni is an American salami that is traditionally made with cured pork, beef, or a little of both, in a natural casing. Its two main recipe flavorings are chili and paprika, which give Old World Pepperoni its distinctive reddish-brown tint and in-your-face taste.

Other common flavorings include:

Where a lot of American-style pepperoni brands taste about the same, each Old World Pepperoni brings something different to the table. Most are centered around a backbone of black pepper, fennel, and mustard seed with few added notes of proprietary uniqueness.

Old World Pepperoni comes stuffed into a casing made from natural materials like sheep gut or beef collagen. This pithy casing makes it a bit challenging to slice.

When you find Old World Pepperoni in the wild on pizza, pasta, salads, and cheese plates, you may be surprised by all kinds of irregular slices and thicknesses. Its fans would say this is part of its old world charm.

Maybe its most charming and unique feature is the way Old World Pepperoni almost magically curls up into a gratifying grease goblet when you cook it.

In the oven, the rim of a slice of Old World Pepperoni tends to bend upward toward the source of heat. This inches the rim closer to the flame, cooking it faster and crunchier than the rest. Some people say the crunchy rim tastes like spicy bacon.

This weird shape-shifting ability turns each slice into a tiny cup with a soft base and a hard lip. The oven heat then slowly liquefies the pepperoni’s fat content, filling each tiny cup with a droplet of golden, gooey grease.

On a pizza, vast shimmering fields of wine-colored pepperoni chalices brimming with liquid gold is enough to make a foodie fall in love.

Pizza scientists and philosophers still haven’t conclusively nailed down exactly why Old World Pepperoni curls. Some think it’s the thickness; others make a case for the casing, which shrinks faster than the sausage itself in high heat.

We found a deep dive into pepperoni curl theory that seems to point to the way the sausage is stuffed into the casing. Natural casings don’t stretch as much as artificial casings, so they stuff less evenly. The sausage gets forced down into the middle while sticking to the sides.

If you cut an Old World Pepperoni stick lengthwise, you can see a U-shaped pattern in the meat bits that looks kind of like a curved wood grain. It makes sense that individual slices would want to follow their U-shaped grain and curl up when heated.

Old World Pepperoni is one of the two top sausages in the American pepperoni market. Its number one nemesis, the Coke to its Pepsi, is American-style pepperoni. 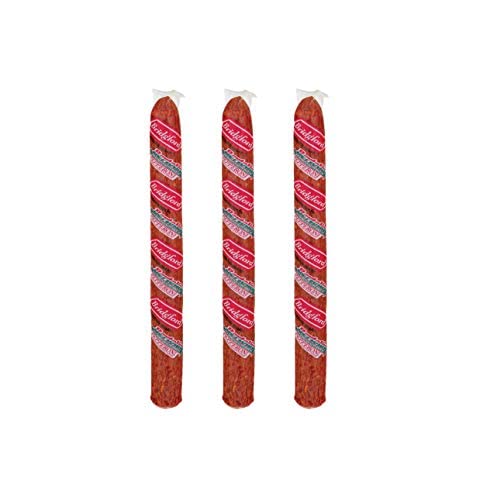 Bridgford Old World Pepperoni is a medium spicy pepperoni that’s more savory than sweet. Each stick of this unsliced sausage is about 20 inches long and one inch in diameter.

The carnivore content includes both pork and beef. The flavor profile is predominantly populated by paprika, but you’ll notice lots of other tasty tangs in the crowded background. You’ll also notice the paprika all over your greasy red fingers if you handle it at room temperature.

A lot of customers say they prefer peeling off the collagen casing, but you can eat it if you like. The chewy covering is tasteless and helps the slices curl when you cook them.

Bridgford sausage is cured with nitrites, so you can eat it raw. We prefer cooking it to take the edge off the striking aftertaste and lower the grease content a little. Slices of Bridgford develop crisp edges at high heat but can get a little crumbly.

This old world pepperoni curls satisfyingly at oven temperatures around 300-400 degrees Fahrenheit. For peak curling, we recommend leaving the casing on and cutting slices about 1/8th of an inch thick.

Richer, spicier, and fattier than your average grocery store pepperoni, Bridgford Pepperoni is perfect for homemade pizzas. If you’re an Italian food purist, it may not be rich enough for antipasto or other traditional Italian dishes and pasta.

If you’re pickier about your pepperoni’s provenance, Vermont’s uncured, unsliced old world pepperoni has a dash of extra care to put your mind at ease.

The pork it’s made with has no added antibiotics or hormones. The smoking process is done with real maple wood. It’s cured with naturally occurring nitrites from celery juice powder.

Vermont puts its pepperoni through an extra-slow fermentation to give it a cleaner, tangy taste. This makes it ideal for standalone dishes like party platters and charcuterie plates where the salami is the star.

Each 12-inch roll is flavored with sharp notes of garlic, fennel, paprika, and mustard seed. If you really look for it, you may notice the distant sour tinge that comes from the celery curing. It’s salted just right, and no flavor is too overwhelming or trying to be the center of attention.

This is a thin-skinned pepperoni with a beef collagen casing that’s easy to peel off if you prefer. Underneath, the sausage is a deep, even red with no visible white clumps of fat or black specks of spice. At the first bite, the texture is soft and moist with not a shred of gristle to be found.

The ingredients and manufacturing process of Vermont’s Old World Pepperoni are as close to all-natural as you’ll find. The various flavorings blend together effortlessly, giving a harmonious accent to a moist pork backdrop that works well over a pizza or under a toothpick.

It’s spicier than its industrialized cousin, with a slightly smaller diameter and tougher texture. Where Old World Pepperoni has an almost mahogany tinge, American-style pepperoni is brighter and oranger.

Regular pepperoni uses a casing made from artificial materials. It’s stretchier than casings made from natural materials and easier to slice, which makes for a more consistent product.

While critics may call it cookie-cutter, the artificial casing is less expensive and provides a more uniform cooking experience with no curling, shrinking, or crisping.

Why You Should Choose Old World Pepperoni for Pizza

If you like complex flavors and often use the word “acquired” before “taste,” you’ll love Old World Pepperoni.

Where American-style pepperoni ferments with a generic lactic acid culture, Old World Pepperoni often mixes in another family of bacteria called coagulase-negative cocci (CNC). These bacteria slow down the curing process considerably, which allows the old world sausage to develop richer colors and flavors than its Yankee sibling.

The old world’s natural casing also sometimes encourages an edible species of protective mold to grow around the outside like a creeping vine devouring a mansion. This gives it a dusty white icing around the outer rim and adds further complexity to its taste profile.

Traditionally, OWP is spicier than regular pepperoni. The extra spice gives it a fresh, pungent bite that either wakes you up or slaps you across the face, depending on how adventurous your tongue is feeling.

One thing that’s a bit hard to describe is the heavier, meatier taste of OWP. You could describe it as meat candy if such a thing existed.

Where Should I Store Old World Pepperoni?

Once the package is opened, you need to refrigerate any leftover pepperoni. You can keep the open end from drying out by wrapping it in plastic wrap or aluminum foil. Even better, minimize airflow by keeping your half-eaten pepperoni sticks in a freezer bag and squeezing out as much air as you can.

Most OWPs don’t need to be refrigerated before opening unless the package tells you otherwise. Sealed, cured sausage technically doesn’t need cold temperatures, but if you don’t plan on opening it in the next couple of weeks, your fridge will help keep it fresh for longer than a cool, dry pantry.

Technically, OWP is a soft salami, which is why it can get away with being sliced thick and unevenly. In mouth terms, it’s less chewy than regular pepperoni.

When the rim curls up during cooking, the raised edges tend to get much crispier and crunchier than the soft middle. Cooked OWP is a bit like Pop Rocks in that it seems like it melts in your mouth in an uncannily crunchy way.

OWP has about the same fat content as regular pepperoni, usually somewhere around 80-90%. The difference is in the curl.

Expert tip: If you prefer not to rub all that fat in your face, you can slice your OWP a bit thicker or a bit thinner. Optimal curling happens with slices between about 1/8th-1/5th of an inch.

Old World Pepperoni is a kind of spicy, savory meat candy with complex flavors and textures. On pizza, OWP slices curl up into charmingly decadent grease goblets that both crunch and melt in your mouth.

Bridgford Old World Pepperoni sticks are a quality, cheap option with a strong aftertaste and just a little too much grease.

Vermont Smoked Uncured Pepperoni is a bit more organic and a bit more expensive. The various flavors balance each other just right, and the meat is finely ground and gristle-free.

If you prefer your food personalized rather than industrialized, we encourage you to try a few different OWP brands and give your taste buds a unique experience they won’t easily forget.